The second sun, Adume, glares down on the southern hemisphere of Tikor at all times. Charring the land into a permanent desert.

It’s estimated that the temperatures in the south would be on average 35 degrees cooler, and the climate would allow the development of vegetation and other delicate life if Adume were not present.

The impact the second sun has on the land is so profound that one could believe Vinyata was cursed if its progenitor had not hand-picked the spot. The Dracon say it is to own a sense of his birth, the Karu say it’s out of atonement, though many people would think otherwise if they knew what Adume really was.

Artist Enmanuel Martinez has done an amazing job of showing the dual suns of Tikor. The natural sun Ila and the second, cursed sun, Adume all beating down on the desert and the D.O.M.E cities. This piece really shows off why the Dracon would dedicate generations to building domed cities that can shield them from the overbearing heat.

Enmanuel also did an amazing job of showing two suns without hitting that dreaded Tatooine vibe that happens sometimes. Adume isn’t there for style points, it truly bears down on the Southern Hemisphere, making much of the area inhospitable to humans.

A Look Inside The Fifth Ebon Expedition, a Swordsfall RPG Campaign Setting 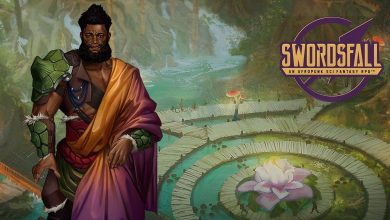