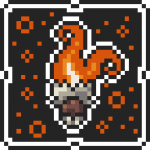 The Karu legends say that when the Great Phoenix, Garuyda spread her wings across the land, some of their feathers escaped. Spreading across the newly formed land.

Where a feather landed, life sprung forth. One of these feathers gave birth to the Karu. Or at least that’s what they think at least.

While the actual item called Garuyda’s Feather is not the same life-giving feather that brought life eons ago, it holds a fantastic power nonetheless. That is if you’re willing to pay the price.

The feather glows with a faint orange light, like fire. Yet it’s cool to the touch. The feather can’t be destroyed no matter the means. Other than the goal, it seems to have no effect.

Yet, the legends tell the story of a holder that once died….only to return to life in a fountain of flames…

What price do you pay for a second chance at life?

Art Drop | Kalali of the East

Tarot Card | The Chariot
3 days ago

Art Drop | The Coast of Hawklore
7 days ago

Art Drop | High Perch, the Capital of Hawklore
1 week ago