The Ebon Cascade is a cursed and ruined land where nothing grows. Or does it? What will humans find when they finally explore the Ebon? Come see the concept sketches for the cursed land and see the land for yourself.

The theme for the Fifth Ebon Expedition is exploration in the Ebon Cascade. A journey into a land where no one has come back. I want the theme of the cover and the art to reflect that. As with the rest of the Swordsfall books, I really want to leave an impression immediately.

So for the cover, I'm really wanting to hit home the “Journey to Ebon Expedition” feel. Show this massive caravan of travelers heading into the Ebon Cascade, this ominous purple and yellow clouds in the distance. Show how the Fifth Ebon Expedition is a large number of people. Show some transport vehicles, people walking beside a Matan R-2 on a trailer.  That sort of journey vibe.

Enmanuel Martinez is on this piece! This is what he had to say about the concept sketches below.

Here are some very rough ideas for the book cover, they all maintain the key stuff within the important areas, I tried to make it look epic while keeping the sense of scale and giving a couple of characters some more visual relevance. Let me know what you think.

As usual with Enmanuel, it's a hard choice. All three are great options! At first glance, my eyes were drawn to #2. I think having the Matan in the close foreground is a great idea as well.

I also really like the waterfall in #1. I'm thinking maybe we take that from #1 and put it over on #2 on the side somewhere. It adds some real personality to the scene, drive home that “cursed land” part. And a last little idea. Some beady eyes and/or shadows of creatures on that opposite ridge or glaring from the chasm.

What do you think? Which one was your favorite sketch? 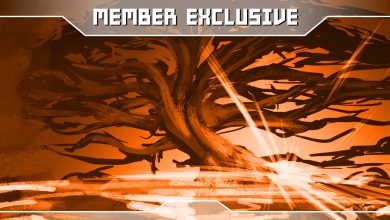