There’s a surprising question I sometimes get when it comes to Swordsfall. One I didn’t ever think I’d have to answer. I’ve gotten a number of messages from white people inquiring if it’s ok for them to enjoy Swordsfall. If they were invading a safe space by getting the books and enjoying the world.

But before I jump into this further, let me put this out there. Does anyone ever ask black folks and PoC if they’ll be ok playing Dungeons & Dragons? Would you think that game is off-limits to people of color? Because the property is itself very white facing, right? And until recent years, the other dark-skinned people were, well, the Drow.

Yet with these things, no one ever assumes that it’s only for white people. In fact, white media is expected to be enjoyed by everyone. Folks will get insulted if you bring up that a popular show may not be for them (*cough* Friends *cough*) because there’s this expectation. An expectation that white and majority media is rated E for Everyone and how dare you say otherwise.

When something is more ethnic. When something has more dark-skinned people than light, the questions start. White folks instantly seem to get this feeling that they can’t participate in it. All because it doesn’t focus on them. Remember, nowhere have I ever said that Swordsfall is “For Black Folks Only!”. I’ve just stated my goal to have black people and PoC in general all over Swordsfall. Let it be loud and proud and prominent in a way that generally only happens with the majority.

It’s why I don’t give “permission” to people when they ask. It misses the larger point and an even larger issue. When people of color are a significant facing portion of a product or IP, white people get antsy, and some just straight-up walk away. Shows that are majority black always have low ratings with white people. There’s an assumption that if it’s a show about black culture that it’s segregated. Not for white people. Publishers avoid putting black people on the face of novels to increase sales. The list goes on.

And it’s all one-sided.

No one thought PoC would avoid watching Game of Thrones when they hired an all-white cast in a super white-dominated world where all the PoC are basically slaves. In fact, if you had pointed that fact out during the time when it was loved, people would accuse YOU of being the racist. Or give you the usual, “But Actually, HISTORY..”.

More people complain about the show Friends than have seen Living Single.

The most salient fact, and more sobering, is that if your product doesn’t have support from the white community, it’s a hard and long road to anywhere. And if your product is media, it can often be the kiss of death. In a way, we’re eternally motivated to make sure anything we make isn’t TOO black. Cause if you do, you may end up having to look for another job.

Swordsfall is, and has always been for everyone. More than just black people need to see a fictional world that’s majority PoC. I think that white people need to be exposed more to properties that don’t circle around them. To be in the room and not control it. They need to know what it’s like to watch and enjoy franchises where not a single person on the screen looks like them.

The song may not be about you, but you can still jam to it.

It’s not about giving permission or easing feelings. It’s about supporting other visions and being able to indulge in them just as much. It’s about knowing that you are partaking in something, not taking it over. 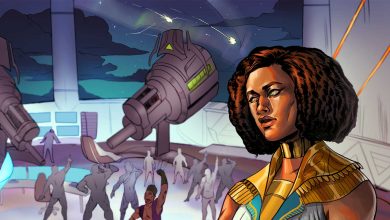 Art Drop | The Dihoma, the Fearless Watchers of the West