A tabletop RPG has many systems, combat and social, and more. But one keeps getting left out. Crafting. Not here, not in Swordsfall. So what’s the tabletop crafting system like?

Tabletop crafting systems is one of those things that has divided not only games but gamers. The idea of being able to craft your equipment is an alluring one, right? It adds a sense of customization that preset gear doesn’t always satisfy. The problem, however, is that doing so at the table is often a frustrating one.

Some tabletop games have extremely robust crafting systems but it slows down gameplay at the table. Or it requires them to do all of their crafting outside of the game. Simply showing up with items. The other problem is that since some games let you craft just about anything, it means that many players come into conflict with the GM. More than a few players have spent their time making an item only for the GM to reject it.

For the next RPG adventure, The Fifth Ebon Expedition, I wanted to start introducing more elements of the full game for test and play. The journey to the Ebon Cascade felt like the perfect setting to introduce the crafting system.

For Fifth Ebon Expedition I’m calling it “The Infinite Forge”. It’s not the name of the system, but it’s the name of the story elements that let you do this sort of crafting out in the middle of nowhere. It’s a large, experimental forge that was constructed for the sole purpose of frontier crafting. It’s a fun way of saying, “Unlimited Crafting for everyone!”. The crafting system is open to everyone, but some of the finer points are saved for Forgewhisperers and Ellementalists.

Creation Points, the Currency for Crafting

One thing I personally hate about some tabletop crafting systems is money. It’s an arbitrary mechanic in a pen and paper tabletop RPG that I just don’t care for. In Swordsfall as a whole, I eschew standard money for a more barter like one. However, for crafting, I didn’t want to use that either.

Instead, we have Creation Points. It’s a measurement that sums up the overall time, work, and materials needed for a craft. So rather than it cost 500 credits for a component, in the Swordsfall crafting system it would be 20 Creation Points. This way there’s no juggling of money or materials. Just creation points.

Every component has a Creation Point Value. The rarer or more powerful a component is, the more CP it costs.

Once you’ve figured out what components you want your item to have, you then compare your final total to the Creation Chart. It will tell you what the Item Rarity is based on the CP, and then the time and energy it would take to make it.

Each level MUST be taken before the next one may be taken.

Example: A Striking Weapon starts at a Base Damage of 1. To reach Damage 4 you must buy Damage 2, Damage 3, AND Damage 4, making it cost a total of 20 Creation Points.

This is the step where we start to venture from other tabletop crafting systems. Once you’ve added up everything and decided what you want to do, you show it the GM. However, rather than saying no, a Gm can decide to add a Karmic Weight to the item.

Think of it as a Disadvantage for an item itself. Not quite Cursed, but maybe a bit unlucky. This Karmic Weight should weave back into the character and overall plot of the Session/Campaign, however. The goal is to allow player freedom but also have to deal with the consequences that come with powerful weapons and items.

Examples of a Karmic Weight

For making armor you get to choose the amount of Soak (decreases damage taken), Defense (adds complication dice to the attacker) and encumbrance (how bulky it is to carry around) and Durability (how much dmg it can take before breaking). Those are the basic parts of every piece of armor. On top of that, you can add a max of three special effects. 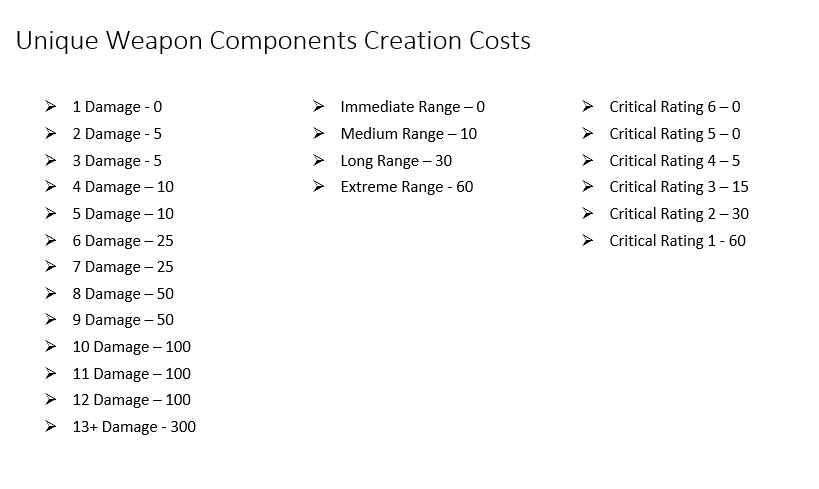 Making a weapon is has a few more steps due to the extra stats associated with them. You can choose the base type (fist, melee (light), ranged (heavy) and such), the Range on ranged weapons, base damage, critical rating (how many Advantages needed to inflict a severe injury), encumbrance, durability and a max of four special effects.

While the base stats determine a lot, the biggest reason players have to craft is to add on Special Effects. These are your extra parts that make an item really badass. Some are Active which means they require Advantages to activate. And some are Passive which means they are always on. Either way, they power up an item which is why they have a maximum number.

Some of the Item Special Effects

To help weigh out the item cost, players can also add Item Defects. These are things that don’t make the item bad but do offer a consequence to it. Picking an Item Defect reduces the total CP cost depending on how many different ones you take and the ranks of them.

Some of the Item Defects

At the end, you add up all your Creation Points to get your final total. If you’re making a melee weapon you can halve the total CP amount. This is due to the limited nature of melee weapons since they have Range and lower base damage than ranged weapons.

The amount of CP you have at the end will determine exactly how LONG it will take for your item to be made, along with the level of Craftsmanship (the crafting skill) you would need to be able to do it yourself. This time measurement isn’t just how long it takes to make it, it’s an overall estimate of how long it would take to get the materials as well.

In a roleplaying sense, there’s no need to specifically go grind for money or a specific material. All that is implied within that measurement. However, a GM could set the Karmic Weight as needed to go to a place to get the material, introducing a new quest for the party. Either way, once the time has gone by, the item itself is done.

That’s the whole process for crafting, and it’s one of those things where it takes longer to explain than to do. In fact, I expect most players to spend time trying to balance the sweet weapon they want versus the amount of time it would take to make it. However, the system really lends itself to the idea that simple items are quick to make, and complicated ones take time.

Here’s some example of a pair of Brass Knuckles. Nothing crazy, but it’s still effective.

An Example of a Completed Weapon

As you can see it ends up being something less than a day to craft. Using the right number of Item Defects makes it a slam dunk. You could even double the Defects and make it “free”. While this means that someone with low Vigor and Agility would have an issue using them if your character has those stats then your perfect.

Lastly, I want to highlight one of the crafting classes in Swordsfall and one that will be in the Fifth Ebon Expedition. Forgewhisperers. For the class, rather than gate crafting to only them, I wanted them to instead to be really good at crafting. And above that, break the rules of crafting and show how expertise makes anything possible.

Here’s a sample ability so you can see how they “break” the system in a way you’d expect a crafter.

If you’re a Tikor’s Finest member then you can download the PDF for the crafting system now! Make some items and let me know what you made. Your feedback is welcome.

For everyone else, I hope you liked the preview! Be sure to catch the Role Kickstarter on June 2nd! Ebon Expedition is apart of the goals of their Kickstarter, so be there!